Lak Lake was an amazing experience. It was the one thing on the trip that I was most worried about because I didn’t know how they treated the elephants there, and I really didn’t want to end up in a place that kept the elephants in chains and hit them with a pointed stick to make them move.

We took a bus midway between local and tourist. We were picked up at our hotel in Dalat and delivered by minivan to the bus station where two seats had been reserved for us on the bus. This was where the tourist bus part ended. The remaining seats were piled high with locals until they were sliding them in horizontally along the top. We probably didn’t make too many friends by having a giant helium shark balloon occupying the usable airspace above our heads.

The drive was absolutely gorgeous – winding mountain roads, stunning vistas, clear skies, and continious potholes. When we finally arrived in Lak Lake, the entire bus (who were continuing on to Buan Ma Thuot) looked in horror at us thinking they would all have to exit the bus just to let us off. In a stroke of genius and pure Indiana Jones, Marieke climbed straight out the window and dragged me with her. The entire bus nodded its approval and six Vietnamese devoured our two vacated seats. 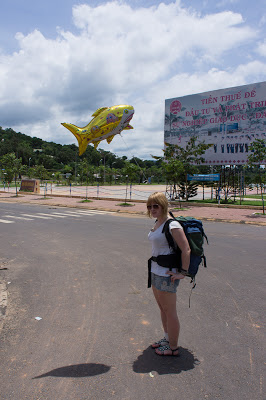 The town was deserted. We wandered around lost and finally found an excellent hotel with aircon for a mere 150,000. The aircon wasn’t working, so I went down to talk to the desk staff. He couldn’t speak any English, but after a moment’s consideration, leapt to his laptop and pulled up Google Translate. I have never had a conversation like this before, and it was fantastic. As he was typing, the English side was constantly changing. I would write “The remote for the air conditioner doesn’t work.” He would reply “The fish are…”, then it would change to “Several times the..”, then “Certainly for the bus you must…”, then finally “I will find some new batteries.” It was spellbinding to watch. At one point, his reply fully completed, the English side read (and I kid you not), “Ireland’s major export. The fruit trees cannot.” Google, I thank you.

After a well deserved cold shower, we wandered down to the lake to find where we could book an elephant ride. I knew that there was a resort by the lake, and was worried that we had overpaid our accommodation by not checking the lake out first. As it turned out, the rooms were far inferior, had less hilarious desk staff, and cost 7 times the price. Well done us. 🙂 Booking the ride was a simple matter, and we went for lunch at the resort restaurant. The resort appeared to have gone out of its way to employ the surliest people in one of the most smiling countries in the world, but we managed to order some very nice food, and the world’s two smallest coffees.

We sat around in the lovely resort garden until our motorcycle came and picked us up for the transfer to Elephant Central. There, right in front of her, is a full grown elephant. All of Marieke’s dreams are coming true and she is speechless. The one thing she has wanted to do on this entire trip, and it’s just about to happen. She goes up to the elephant and introduces herself. The elephant seems quite pleased to be acknowledged and spoken to, rather than just sat upon, and says “Hello” back, in a sort of standing-there, swaying-its-trunk kind of way. The driver arrives, jumps on the elephants back, and brings her round to the platform. We get on, and the trek has begun!

The second thing I was worried about was that taking an elephant around a lake might be quite boring compared to say galloping through the jungle, but as it turned out I think this was far, far better.

We started off going for a tour of the local village. All the kids came out to say hello, and we swayed through wooden cabins and tiny side streets until eventually we arrived at the lake. Seeing cool refreshment ahead, the elephant picked up the pace and bounded excitedly into the water. This was awesome – we were riding an elephant waist high through a lake surrounded by some of the most stunning scenery I hvae ever seen. Marieke is convinced that she has managed to die sometime in the last couple of hours and is now in heaven, riding elephants amongst the angels and lakes of paradise. I’m pretty happy to sit there and figure out exactly the right shutter speed to capture crystal clear landscape images from the back of a constantly jolting elephant seat. 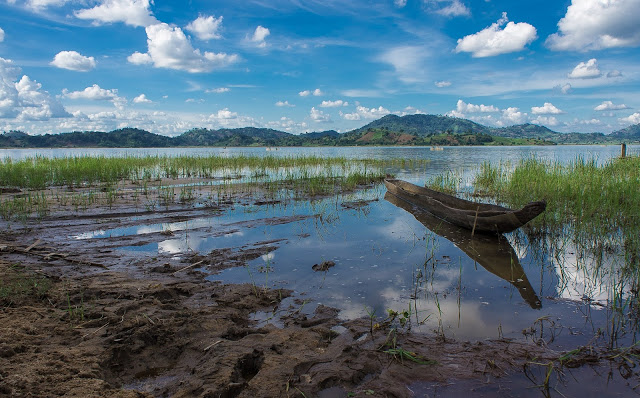 After the ride we got a Revive (holy shit, this is the best drink in the world), and looked around for motorbike guy. He’s long gone, so we walk the 1.5km through the village back to our hotel. It is incredibly beautiful, an unspoiled slice of rural Vietnamese life. I am completely amazed by a day that couldn’t have gone any better had I planned it that way. 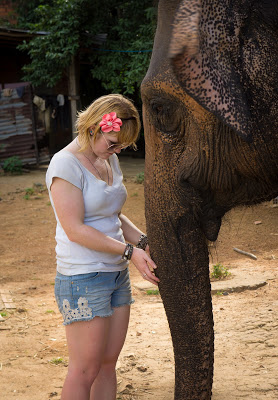 On the bus to Dong Hoi

Nha Trang by way of Norway