I think one of the greatest things about travel is the local public transport. Every country is different. In Thailand I enjoyed an 8 hour train ride on a hard plastic bench seat with someone’s kid on my lap, a chicken on his lap, several baskets of fruit and vegetables under my feet, and an old lady sleeping on my shoulder.

Nepal is even more fun! My bus driver this morning looked about 16 years old, and he drove with one hand at breakneck speed while chain smoking with his other hand. He was probably the coolest bus driver I’ve ever seen. Every now and then he’d take a break from the boring “safe” one-handed driving to answer a call on his phone or send a text message. I wouldn’t have believed it possible to steer a bus around cliff edges using your knees, but apparently it’s very possible!

I’d met an Israeli girl a couple of days ago and she’d told me about a bungy jump that she was heading to. I’ve bungied once before in my life on a 47 metre drop back home in Taupo. This was one hundred and sixty metres. Oh hell yes!!!

The bungy is out at a place called The Last Resort, which isn’t too positive a name for a place where you’re jumping off a bridge potentially to certain doom, but I’m sure their marketing manager had some good meaning in mind for it. But the view was spectacular! 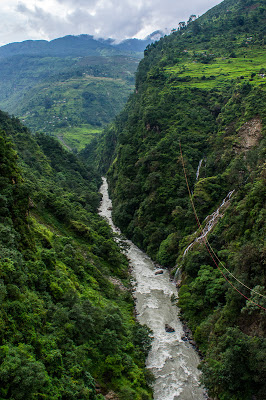 After a thorough safety briefing we all to come up and get weighed for our jump. This is the first time I’ve been on a set of scales in 5 months. When I left New Zealand, I was 82kg and feeling pretty good about it. It’s extremely hard for me to gain muscle and I’d worked damn hard on that. I stepped on the scales feeling a little trepidation and the number was read out.

68 kilograms. Shit! I’ve lost 14kg since I started this trip. I need pies, and fast!!! Where’s Georgie Pie when you need it? I knew that I was a bit thinner than I started, but not that much. Oh well, time to step up the eating that’s for sure. India will be a lot better I think, less rice, more butter and cream. Bring on the butter chicken.

Since I’ve bungy jumped before, I decided that the only reasonable way to fall 160 metres off a tiny platform would be to jump off backwards. It was an incredible feeling throwing myself that far down into the unknown without even being able to see it. I don’t have a picture of my jump unfortunately, but here’s one I took of one of the other people on the trip: 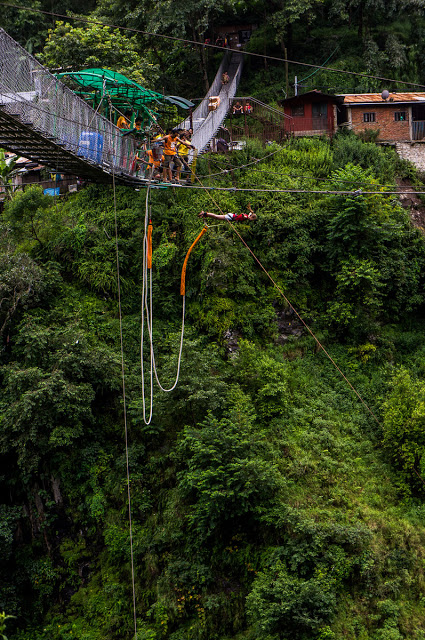 Now tell me you don’t want to do that! If you ever get the chance, I suggest you go jump off a bridge.