I applied for my Iranian visa when I first arrived in Delhi, on November 21. The embassy in Delhi told me to get an authorisation code from iranianvisa.com, which would be sent to the embassy, and then I’d just need to bring my passport in for the stamp. A very frustrating and drawn-out experience with iranianvisa.com left me $300 poorer, and visa-less on the 11th of December, when my flight left for Iran. This was not good.

New Zealand citizens are granted Visa-On-Arrival privileges, but I’d read some horror stories of tourists in my situation being deported. I have no idea how deportation works, but I didn’t have the money to pay for that.

The main thing that I needed at the border was proof of an ongoing ticket. I didn’t have the money for that either. I was hoping to catch the train into Turkey after my month in Iran. My sister came up with the brilliant idea of buying a 100% refundable ticket, getting into the country with that ticket as proof of my departure plans, and then simply getting a refund for the ticket.

I decided to take that idea to its next logical conclusion, and create an entirely fake departure ticket for free. I am not saying this was a smart idea.

WARNING: Kids, do NOT try this at home.

I present to you my entirely fictional ticket out of Iran: 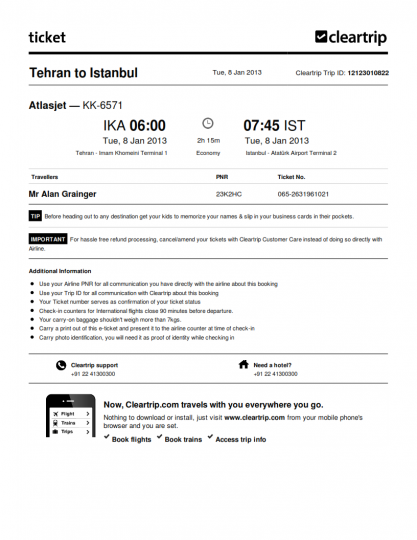 (For those interested, yes, this is an actual Cleartrip ticket, modified for a real flight, using the original fonts for authenticity.)

When I got to the check-in at the Indian end, the ticket was burning a hole in my pocket.

There was some discussion at the gate as to whether I could even come through without a visa on my passport, but a few phone calls and some explanations about NZ’s VOA privileges, and I was away.

At the Iranian end, I got off the plane and went confidently to the visa application window. I handed over my passport and documents and tried to look casual. The customs officer looked at the ticket and tapped some keys on his keyboard.

Then he gave me an odd look. Back to the ticket. Back to his screen. More typing.

He got on the phone.

I am shitting my pants.

I don’t think I’ve ever been this worried in my entire life, and I am exerting every ounce of self-control to maintain a calm exterior.

Just when I was ready to confess the whole plan, he gave me a form to fill out, tucked away my ongoing ticket, and put a big shiny visa sticker in my passport.