The couchsurfing idea in Tatvan didn’t work out, but we found we could spend the night at the train station in the waiting room. Not a problem for tough, independent (and poor) travelers like us. The only problem was that we arrived at the train station at 3pm, and our train wasn’t to leave until 7am. This was going to be a long wait…..

Hanging out with us the entire night were rotating platoons of Turkish soldiers. We had a chat with them and apparently they were on counter-terrorism patrols in the area. Tricksy terrorists, always hanging around train stations….. The army guys were pretty excited by our various bits of technology, and once we pulled up Google Translate, my laptop spent the whole night being passed from hand to hand as we had ridiculous conversations about life, love, and Turkey. One of the guys saw my portable speakers and brought out a memory card to plug into it. Now we had an awesome Turkish soundtrack to our night too!

I took some photos of Sam posing with them, and a little bit later the commander found out and furiously made us delete them all. Apparently due to the sensitive nature of their mission, we were under suspicion of spying for the Syrians, and he was taking no chances. What is he talking about, we didn’t even have guns!! 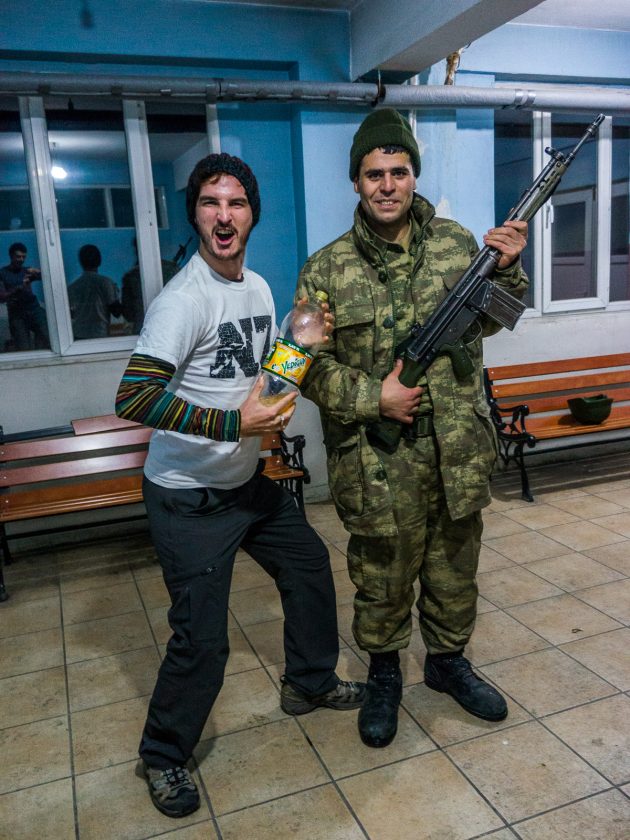 Sam rocking the latest in NZ offensive technology. Luckily I’d already copied this one off… 😉

Finally the morning came around and I was greeted with this beautiful sight: 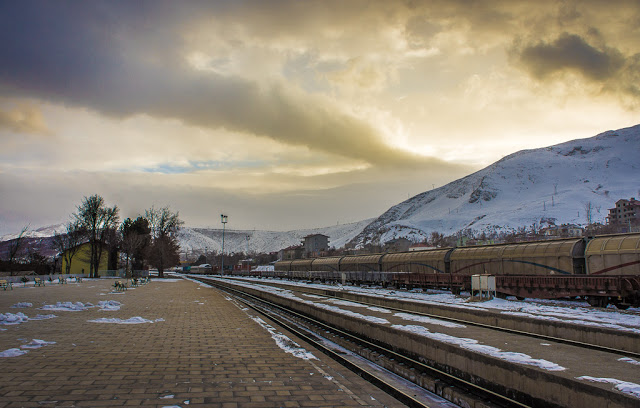 I’d love to say our journey was like that, but by the time our train got there, it looked like this: 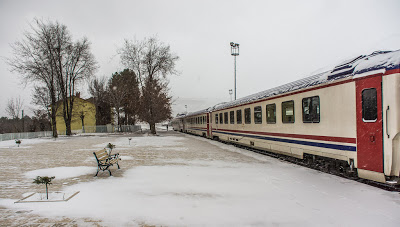 On the plus side, we were both so incredibly tired that we wanted to go to sleep as soon as we got on the train. If it hadn’t been snowing, we might have missed some beautiful scenery 😛

The one problem with the train that we didn’t foresee, is that there was absolutely no food. I was expecting a dining cart, or at least some sort of kebab stand at the various stations we passed. Nope, absolutely nothing. We survived the first 24 hours on potato chips and chocolate bars, and then finally we arrived in a town big enough to buy some bread, cheese, and boiled eggs. It was a feast to be envied.

At Kayseri we dropped our bags off at the big bus terminal and caught a coach out to Avanos, heading for the Fairy Chimneys of Cappadocia. We’d spent so much money already in the last two days that we were on a serious budget binge, so we decided to skip the taxi to Goreme, and just hitchhike instead. It was a pretty incredible sight walking down the road waiting for a ride:

It hardly took any time for someone to pick us up and they were just lovely. They had a shop in Goreme near all the sights, and dropped us off right in the thick of it. The light was fading fast so we just picked one of the destinations and beelined there.

The place we headed for was called the Fairy Chimneys. They are steeples of rock that have houses carved out from the inside. The cliffs are full of vertical villages, and the creativity of people to make a life for themselves in any terrain was astounding. I had heard that they were incredibly beautiful, but I think they lost a bit of their attraction in the cloudy soup of winter. The landscape however was stunning, proud mountains standing up defiantly against the stormy skies:

We thumbed a ride back to Avanos the same way we came, and our driver told us all about his city, and the local sights. He told us that before we left we absolutely had to head down to the river and watch the sunset. 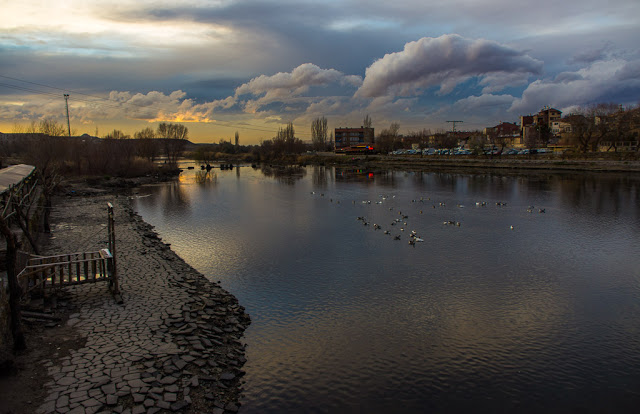