My entirely pleasant journey in the back of a songthaew with Samantha (Argentina) is interrupted as we stop to pick up the remaining members of our trekking party – five teenage girls from Ireland. I had heard that the awesomeness of your trek depends entirely on the awesomeness of your group… This is not going to be good. They have about a dozen plastic bags filled with every kind of junk food you can buy at a 7-11, apparently not wanting to risk eating what the natives are eating. I look across at Samantha; she mimes putting a gun to her head. My thoughts exactly.

By the time the 40 minute drive to base camp is over, we have all introduced ourselves and are chatting happily. They turn out to be really fun (and have awesome accents), and despite what I assumed when I first saw them, they aren’t little rich girls travelling with their parents. They are all friends who decided to go on a trip through Thailand, Cambodia, and Vietnam. They’d only just started, so this was the fourth day of their holiday. I’m impressed, it’s a pretty cool thing to be doing so young and on their own. You go you crazy red-haired Irish girls! 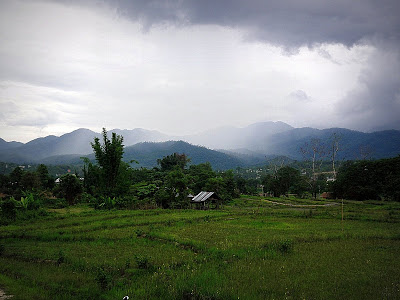 We start off with a small 4 hour hike to the elephant camp up in the hills. And it is pretty much up-hill the whole way. I’ve got to be honest here, jandals was not the best option for a trek like that. But my shoes were lost/stolen at some point along the way to Chiang Mai so there wasn’t much I could do. I looked for some shoes to buy, but getting my size in Thailand is proving quite hard. But I really probably should get some at some point…. 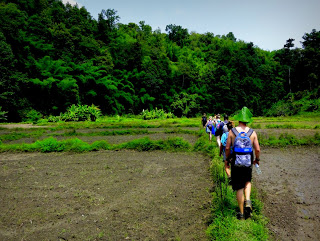 The hike was beautiful, but again, to be perfectly honest it just looked like I was hiking around New Zealand. Except for the bamboo and bugs. At one point the adventurous ones of us swung across a river on vines which was pretty sweet. 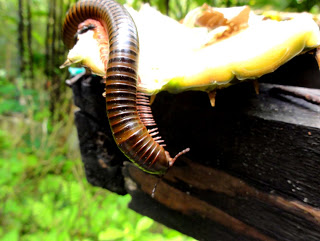 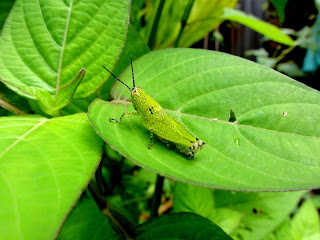 We got to camp and dinner was laid out for us. Not bad – a huge pot of curry, and some eggplant and chicken thing. After dinner they built up this huge bamboo bonfire and we all sat around chatting. Someone had some cards so I taught everyone how to play Scum, which then went on the whole rest of the night. I’m sure it’s not an NZ only game, but it’s surprising how few people know it around the world. Everyone I’ve ever taught it to has thought it’s one of the coolest card games they’ve ever played. Definitely my favourite.

The next day we went for a small hike to a waterfall which was pretty awesome and went for a swim. It felt so good after hiking so long. I’d started feeling pretty seedy that morning and it only got worse with all the walking. When we got to the white water rafting part I decided I was probably going to sit it out. I spent the whole safety briefing and everything lying down wanting to die, but then when they started loading the rafts into the water I thought I’d better not waste the money I’d already paid and give it a go. Turned out I didn’t feel too bad on the raft, and it was an awesome trip!! Huge rapids, the water was running pretty well, some of the other rafts got stuck in hilarious ways, and it was a damn good time. About halfway through the trip we pulled up alongside what I thought was bamboo docks. We all jumped off the rafts and onto the “docks” which turned out to be bamboo rafts. Awesome! They punted them offshore and down the river we went some more, native style.

After the river our driver took us past some “traditional” village things just trying to get us to buy trinkets etc, and by this time I am feeling really really bad. I’ve gone to every toilet we’ve stopped by but none of them have toilet paper and I didn’t bring any and I’m feeling this could be quite dangerously explosive. Finally we get on the road back to Chiang Mai, and I’ve now got a serious chill going on. I’m wrapping my arms around my thin t-shirt which is the best I can do and trying not to throw up. We eventually get back to my hostel after about an hour, and I run straight to the bathroom. Not a moment too soon…..

Luckily I booked the 6-room dorm, and no one else is in here!  I have a whole room to myself and my own bathroom. That worked out pretty well. 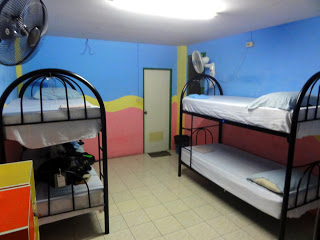 Today has been kind of a waste as I’m just lying in bed feeling sorry for myself. I have that travel med kit from the Travel Doctors and it’s got a bunch of stuff specifically for this situation so I’ve been taking that and feeling pretty alright. Hopefully get back onto some solid foods soon – I’m kinda hungry now. 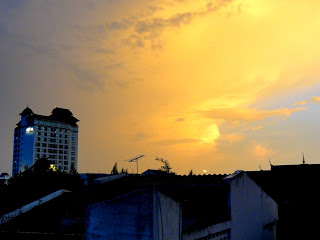